If you want to receive an email alert when a new message is posted, send an email to Contact@MyDailyDevotion.ORG              Follow us :

“My master has withheld nothing from me except you, because you are his wife. How then could I do such a wicked thing and sin against God?”  And though she spoke to Joseph day after day, he refused to go to bed with her or even be with her.﻿”﻿﻿ ﻿﻿﻿﻿﻿﻿ [Genesis 39:9-10]
“One day he (Joseph) went into the house to attend to his duties, and none of the household servants was inside.  She (Potiphar's wife)  caught him by his cloak and said, “Come to bed with me!” But he left his cloak in her hand and ran out of the house.﻿" [Genesis:39 :11-12] ﻿  ﻿ 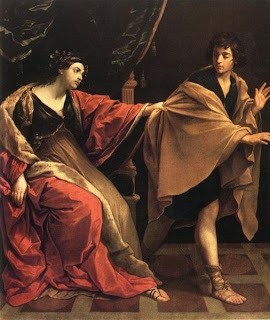 All things work together for good to them that love God﻿﻿ ﻿
The story now returns to Egypt, where Joseph was appointed overseer in the house of Potiphar, captain of the guard in Pharaoh’s palace.The Lord was with him and he became a successful man.
Potiphar’s wife tried repeatedly to seduce Joseph, but he steadfastly refused. He would not betray his master’s confidence or sin against his God. One day she caught him by his garment. He squirmed out of it and fled, leaving her holding it. He lost his coat but saved his character and eventually gained a crown. She  used the coat as “evidence” that Joseph had attempted to rape her.
Believers are taught to flee fornication, idolatry, and youthful lusts. Better to flee than to fall. Without proper investigation, Joseph’s master ordered him to prison; but even there Joseph was blessed by the Lord and was given a position of responsibility.
The fact that Joseph was not executed may indicate that Potiphar did not entirely believe his wife; he couldn’t help knowing her true character. The truth of Romans 8:28 is wonderfully displayed in this chapter. “And we know that in all things God works for the good of those who love him, who have been called according to his purpose.”  God was working behind the scenes for Joseph.
Posted by MyDailyDevotion.ORG at 6:51 PM